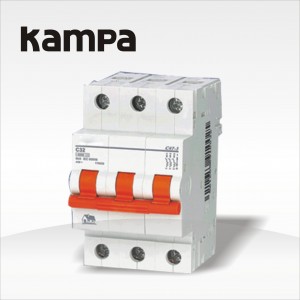 C47 Miniature circuit breakers have protective function as shortage as overload, and are used in industry, commerce and dwelling, and protect fractional electric motors. They also have many merits of high protective grade (up to Ip20), high breaking capacity, reliable sensitive action, convenient, multipole assembling, long life etc. They are mainly adapted to the circuit of AC 50Hz, 230V in single pole, 400V in double, three, four poles for protecting overload and short circuit. Meanwhile , they are also used in turning on or off the electric apparatus and lighting circuit under the normal condition .